August started amazingly as I worked at Camp Bestival as a kids entertainer with an event company. This really was the life of riley – to be paid to lark about with my mates and then watch bands? Are you kidding?! 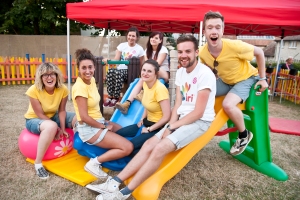 Then, the big call. After spending much of the last 8 months running and eating bananas for this sodding Tough Mudder thing, I was all prepared to do the 13-mile run, through mud, wood and electricity on the 17th August.

An invitation to attend the International Press Screening of the movie ‘Dolphin Tale 2’ in Tampa, where I would see the filming locations and interview some actors involved. They would both take place on the same day, but 3000 miles apart.

So the choice was this, or to follow-through on a promise I’d made to myself and my best friend, for which I had spent a lot of gym-membership money and eaten nothing but Chicken for months, to overcome a fear I’d had all through growing-up about whether I could actually focus on a physical task and see it through to the bitter-tearful end.

When I stepped out of the first class lounge and onto the flight that would take me back to Heathrow after 4 days of chatting to Dolphin Trainers in Aquariums, interviewing Hollywood A-Listers and lounging, eating and drinking by pool in 90 Degree heat for free, I knew I’d made the right choice in potentially sacrificing my best-friendship.

For the next few months I spent a lot of time roaming around different radio stations, spending a day here-and-there at Radio 1, Radio 2 and Radio London, all the while working with BBC Radio Berkshire and hosting the shows on Fun Kids.

I also travelled across Croatia to ‘Unknown’ festival, which consisted of 5 days of 4 beats blown out through distorted speakers.

The highlight being landing in the only airport in Eastern Croatia, which was essentially a field and the dwellers of the town actually left their homes and crowded around to see the plane actually landing.

In October, I travelled around the UK on a promotional tour for the release of ‘Mr Peabody and Sherman’. This really meant I trained it to wet, windy dog-parks to interview people from ‘This Morning’ and ‘Coronation Street’, whilst desperately trying to ask dog-owners where they’d like to travel back in time to given infinite options. I don’t remember this being a career option at school…

I was also in a play!

Covering myself in blood every night for a week playing a crazy Prince slaughtering his Mother for the throne. I’m reliably involved I was more like The Artist Formerly Known as Prince, rather than a physically threatening Greek one.

Apart from hosting another batch of weekday holidays for Fun Kids, I essentially did nothing in December (especially not look for work, hence… y’now, writing this blog…) other than watch Love Actually, and dream about opening a PlayStation 4 on the 25th.

THIS DID NOT HAPPEN.

Avoiding that terrible way to end the year, 2014 was pretty fantastic 12 months and has prompted huge excitement on what this year will hopefully bring.

MAINLY WITH A PLAYSTATION 4.

Remember to listen, or direct any 8-14 year olds to listen, to my show – 11-4, Saturdays and Sundays on Fun Kids – Thanks for reading.